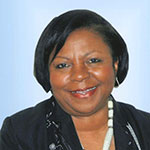 Amanda Bell of the Rockingham County Board of Education is the 2016 recipient of the Raleigh Dingman Award for Outstanding Boardsmanship. To receive this esteemed award, which is given annually by the North Carolina School Boards Association (NCSBA), a board member must be peer-nominated by their local school board. 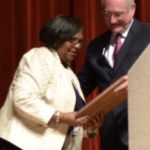 “This board member will be a great asset as she serves as an advisor to the State Board of Education,” remarked NCSBA Executive Director Ed Dunlap during the announcement. She has devoted more than 34 years to the field of education. She has been an advocate for children, a voice for parents, a bridge for community members, and a mentor to new board members. Bell has served on NCSBA’s Board of Directors and on the North Carolina School Boards Trust (NCSBT). She is a lifelong learner who always stands up for public schools.

The Raleigh Dingman Award is the highest honor bestowed on a North Carolina school board member. The award is named in honor of Dr. Raleigh Dingman, the Association’s first full-time executive director, and was first presented at the 1981 annual conference. In 2002, legislation was passed by the North Carolina General Assembly that provides for the Raleigh Dingman Award winner to serve as an ex officio advisor to the State Board of Education and to attend meetings and participate in deliberations of the State Board. Amanda Bell will also serve in this capacity.