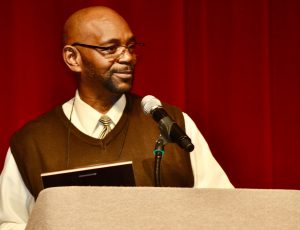 Chris Wilson of the Camden County Board of Education is the 2017 recipient of the School Board Member Leadership Award. To receive this esteemed award, which is given by the North Carolina School Boards Association (NCSBA), a board member must be peer-nominated by their local school board.

“This board member has worked diligently to close the achievement gap in his community and throughout the state,” said NCSBA Past President Chuck Francis of Wilson’s commitment during his 15 years on the Camden County board. Wilson is a member of the NC Caucus of Black School Board Members, advocates for progress and innovation, and helped start the nation’s first U.S. Coast Guard Junior Leadership Program in 2006.

The School Board Member Leadership Award honors a school board member for exemplary leadership during the previous school year. In recognition of their outstanding service as board of education members, board members were selected for the honorary All-State School Board. These individuals have made significant contributions to their school systems during their tenure and were peer-nominated for the School Board Member Leadership Award or the Raleigh Dingman Award, which was won by Roberta Scott of Warren County. This year’s All-State Board Members are: Eltha Booth, Beaufort County; Shearra Miller, Cleveland County; Christian Overton, Camden County; Dr. George Truman, Anson County; Barbara Yates-Lockamy, Columbus County; and Bob Wyatt, Rockingham County.