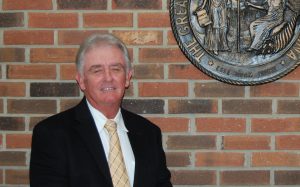 Monte Herring of the Columbus County Board of Education is the 2019 recipient of the Raleigh Dingman Award for Outstanding Boardsmanship. To receive this esteemed award, which is given annually by the North Carolina School Boards Association (NCSBA), a board member must be peer-nominated by their local school board.

“The winner of this year’s Raleigh Dingman Award has been instrumental in strengthening accountability measures in his school system, which have resulted in high student achievement despite being a low-wealth district and having been devastated by two hurricanes in the last three years,” said NCSBA Executive Director Ed Dunlap during the announcement. Herring promotes professional learning communities, leading to more open, honest communication among stakeholders, and he challenges all instructional leaders to continuously strive toward innovation. His support has been crucial in securing funds for two new schools, as well as a one-to-one Chromebook initiative for middle school students, and he is dedicated to helping students along their journeys to becoming leaders in a global society.

The Raleigh Dingman Award is the highest honor bestowed on a North Carolina school board member. The award is named in honor of Dr. Raleigh Dingman, the Association’s first full-time executive director, and was first presented at the 1981 annual conference. In 2002 legislation was passed by the North Carolina General Assembly that provides for the Raleigh Dingman Award winner to serve as an ex officio advisor to the state board of education and to attend meetings and participate in deliberations of the state board. Scott will serve in this capacity.