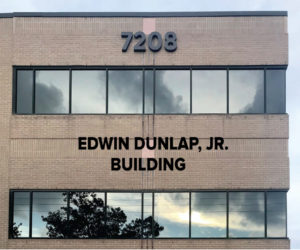 The North Carolina School Boards Association (NCSBA) Board of Directors has named its office the Dr. Edwin Dunlap Jr. Building in honor of its long-time executive director. Dunlap, who has served in the position since 1994, announced his retirement in March effective January 2021. 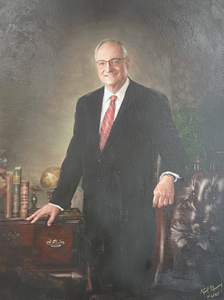 Portrait of Ed Dunlap unveiled during the 2020 Annual Conference.

“Given all of Dr. Dunlap’s significant achievements, the board of directors believed that a parting plaque on the wall would not fully express our gratitude for his vision and leadership of this outstanding, thriving association,” said NCSBA Immediate Past President Brenda Stephens during a presentation at the virtual NCSBA Annual Conference on November 6. Stephens also announced that the board granted Dunlap the honorary title of executive director emeritus at its March meeting.

When Dunlap joined the association in 1979 at the age of 29, he was the third employee. NCSBA now has a team of more than 30 staff members who work out of the newly dedicated 45,000-square-foot office building, which was built in 2000 on Falls of Neuse Road in Raleigh. With the help of Dunlap’s visionary leadership, the North Carolina School Boards Trust was established in 1982 and has since become one of the most successful risk management programs in the National School Boards Association (NSBA) federation. NCSBA formed the North Carolina Academy of School Boardsmanship in 1985 to help train and develop school board members. The North Carolina School Boards Action Center was created in 2013 to enhance the association’s advocacy efforts. Dunlap has also overseen the growth of NCSBA’s various policy and superintendent search services.

“I’ve had an absolutely wonderful career here. I don’t know anything that I had rather have done,” said Dunlap, who is the longest serving executive director in the NSBA federation. Leanne Winner, the association’s director of governmental relations since 1998, will move into the executive director position upon Dunlap’s retirement.