An updated State revenue forecast released on Tuesday shows overcollections for this fiscal year ending on June 30 to be $1.91 billion greater than anticipated in February. Total revenue overcollections for the 2020-2021 fiscal year are now estimated at $6 billion. The June forecast also projects an additional $4.6 billion more revenue for the 2021-2023 fiscal biennium than was previously predicted in February. The joint forecast released by the Legislative Fiscal Research Division and the Office of State Budget and Management now expects a total of $60.4 billion over the next biennium, with $29.7 billion in fiscal year 2021-2022 and $30.7 billion in fiscal year 2022-2023. This surplus can be attributed to several factors, including:

In a press release, Governor Roy Cooper explained that this new revenue forecast would cover his entire proposed budget and the Senate’s proposed tax cuts, even with some money left over. Senate leader Phil Berger released a statement saying that “A huge surplus does not mean we’re spending too little. It means we’re taxing too much.” House Speaker Tim Moore said in a press release that “North Carolina’s overall fiscal policy has set the stage for a commitment to conservative tax policies and we will continue to work collaboratively with the Governor and the Senate to keep our state on an upward trajectory of economic growth.”

These newly improved revenue numbers come as we are expecting to see the first version of the State budget from the Senate next week. According to a news source, the Senate plans to release its proposed budget on Monday, followed by committee hearings on Tuesday and Wednesday, and floor votes on Thursday and Friday. Then the House can be expected to release its own version of the budget in July, with a compromise budget being sent to the Governor in August. It is unknown if the legislature will adjust their agreed spending target based on this new revenue forecast.

Education-Related Bills with Action This Week

HB 159: Education Law Changes (primary sponsors: Representatives John Torbett, R-Gaston; Hugh Blackwell, R-Burke) was modified and approved by the Senate Education/Higher Education Committee and referred to the Senate Finance Committee. For several months NCSBA, the NC Association of School Business Officials, and the NC School Superintendents Association have expressed our concerns about Section 3, which prohibits public school units (PSUs) from getting reimbursed for costs incurred while operating and administering a school nutrition program, unless the program has a minimum of two month’s operating balance. (The original bill called for a minimum of three month’s operating balance, and current law calls for one month.) Section 3 also caps the rate at which PSUs can get reimbursed for these costs at 8% of a school nutrition program’s annual budget (the current average is around 14%). Costs incurred by PSUs include Human Resources functions, bookkeeping, insurance, space, electricity, and water. 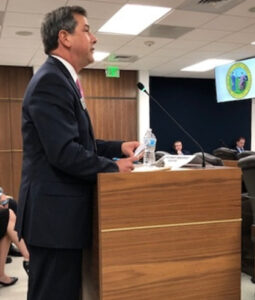 Attempts were made to resolve this issue with DPI without the need for legislation, but unfortunately, we could not come to an agreement. During the Senate Education/Higher Education Committee meeting, NCSBA testified and called for the removal of Section 3 because we do not believe that it achieves the long-term goal of strengthening school nutrition programs, and it also creates an unfunded mandate. NCSBA will continue to work with legislators, DPI, and school administrators to improve the bill. Our goal is to create strong, sustainable school nutrition programs across the State, as we recognize how critical school nutrition is for student success.

Additionally, HB 159 does the following:

Additionally, HB 335 does the following:

When presenting HB 335 to the committee, Representative Bradford applauded the efforts of NCSBA and the NC Coalition for Charter Schools to negotiate and come to a compromise. NCSBA does not support a late fee for LEAs but given the procedures and timeframes in the compromised bill, it is our hope that the penalty will never come into play. Click here for an official bill summary.

The following are provisions passed by the Senate and removed by the House:

The following are provisions added by the House:

HB 64: Government Transparency Act of 2021 passed the Senate 28-19, and failed concurrence in the House. This bill requires local boards of education (as well as counties, municipalities, community colleges, State agencies, etc.) to not only maintain the date and general description of the reasons for each promotion, but also for each demotion, transfer, suspension, separation, or dismissal. An employee can appeal to not have the date and description of their promotion, demotion, etc. disclosed if the information is protected by an applicable confidentiality law, like the Health Insurance Portability and Accountability Act (HIPAA) or the American with Disabilities Act. Click here for an official bill summary. As a reminder, HB 64’s bill language was taken from SB 355, which did not make the crossover deadline. NCSBA continues to work with Senator Norm Sanderson, R-Pamlico, who is the primary sponsor of SB 355, to address our concerns.

SB 668: Anti-Pension Spiking Amds & Litig. Moratorium (primary sponsor: Senator Jim Burgin, R-Harnett) passed the House 102-2 and was sent to the Senate for concurrence with House changes requested by NCSBA. This bill does the following:

HB 812: Clarify Remote Meetings During Emergencies (primary sponsors: Representatives Dean Arp, R-Union; Bobby Hanig, R-Currituck; Erin Pare, R-Wake; William Richardson, D-Cumberland) was signed by the Governor into SL 2021-35. This bill clarifies the authorization of remote open meetings during emergencies. It allows a public body to change a meeting notice to be a remote meeting at least six hours before the start of the meeting and include how the public can access the remote meeting. Click here for an official bill summary.

SB 722: Revise Local Gov’t Redistricting/Census (primary sponsors: Senators Warren Daniel, R-Burke; Paul Newton, R-Cabarrus; Ralph Hise, R-Mitchell) received vote for concurrence in the Senate 33-14 and was sent to the Governor. Because of the delay in receiving 2020 census data and limited time for municipalities to redraw districts, this bill delays affected 2021 municipal elections, as well as 2021 Charlotte-Mecklenburg and Lexington City boards of education elections. Click here for an official bill summary.

SB 288: Rutherford College/Bd. of Ed. Burke/Caldwell (primary sponsor: Senator Warren Daniel, R-Burke) passed the House and was sent to the Senate for concurrence with House changes.

Click here for a chart of all education-related bills that NCBSA is tracking.

The State Board of Education (SBE) met for a called meeting on Thursday to approve the following:

Prior to the vote State Superintendent Catherine Truitt stated that she personally reviewed every page of the supporting documents and endorses their approval. Additionally, Board Chair Eric Davis stated that the SBE is not seeking a delay in the implementation of these new standards. This contrasts with a recent House addition to SB 654, which delays the implementation of the new standards by one year. Board member opposition came from three Republican-appointed members, including Dr. Olivia Oxendine who expressed concerns about lack of expansiveness and lack of inclusion of certain historic figures in the supporting documents. As a reminder, these supporting documents are not requirements but rather resources and ideas to help teachers comprehensively address the required standards in their classroom curriculum. Additionally, the grades 6-12 unpacking documents are still being developed and will be presented for approval at the Board’s July monthly meeting. Click here for an article on the discussion and approval, as well as other statewide education action this week.

ESSER III State application: The SBE approved the American Rescue Plan Elementary and Secondary School Emergency Relief (ARP ESSER) fund State application. NC has received two-thirds of its $3.6 billion in ESSER III funds, with the last third subject to an application process. The application template was required to stay open for a 30-day public comment period, which closed on June 14 with a total of 230 comments. The presentation to the Board includes a slide reviewing the different types of comments submitted. 88% of the public comments were about critical race theory, which presenters explained is not part of the ARP ESSER application, but Board Vice Chair Alan Duncan stated the importance of knowing what the public is concerned about. A modified version of the application (based on Board feedback) will be submitted to the US Department of Education by June 21. DPI staff explained that this application plan is not a comprehensive spending plan, which is being developed and will be presented at the next Board meeting. Additionally, DPI staff expressed concern about House modifications to SB 654 that direct the use of the 10% DPI reserve of the ESSER III funds, which would prevent DPI from administering the funds according to their spending plan. Click here to view the ARP ESSER fund State application.

This week the US Department of Education’s Office for Civil Rights affirmed that Title IX protects students from discrimination based on sexual orientation and gender identity. The Department’s interpretation is based on the US Supreme Court decision in Bostock v. Clayton County last year, in which “the Supreme Court recognized that it is impossible to discriminate against a person based on their sexual orientation or gender identity without discriminating against that person based on sex.” Click here for the Department’s press release and click here for an article.

On Friday, June 11, Governor Cooper extended a variety of COVID-19 prevention measures until July 30, including the mask mandate in schools. Click here for the press release.