SB 173: Free the Smiles Act, which was gutted and rewritten by the House, failed concurrence in the Senate, and a conference committee will likely be appointed. This bill allows local school boards to determine the use of face masks for the 2021-2022 school year. It also permits the Governor to require masks for individual schools to reduce the transmission of COVID-19 but does not permit a statewide mask mandate for all schools. Before the concurrence vote failed on the Senate floor, Senator Joyce Krawiec, R-Forsyth, indicated that the Senate is not opposed to the bill but would like to make some changes before sending it to the Governor. It is unclear what those changes are. Additionally, this week the ABC Science Collaborative released reports on COVID-19 transmission and the use of masks in schools. For more information on those reports, see that section below. Click here for an official bill summary.

Committee Chair Representative John Torbett, R-Gaston, stated that the House will do a lot of work on the budget during the weeks of July 12th and 19th, following the legislature’s break for July 4th next week. We are fairly confident that there will not be a budget sent to the Governor until at least August.

The push for grade level reading by the end of third grade has made increasing the number of TAs in early grades a top priority for local school boards during this legislative session. Taking into account the COVID-19 pandemic, rising second graders have not yet spent a full year in a school building. If this is a top priority for your district, we urge you to contact your House members by July 15th.

HB 159: Education Law Changes (primary sponsors: Representatives John Torbett, R-Gaston; Hugh Blackwell, R-Burke) was modified and approved by the Senate Finance Committee and referred to the Senate Appropriations/Base Budget Committee. The new version of the bill deletes the section on school nutrition programs’ operating balance and replaces it with a report on school nutrition programs. Senator Michael Lee, R-New Hanover, sponsored the amendment and said that he felt more information was needed on the funds, balances, costs, etc. of school nutrition programs before the Senate agrees to such a controversial change. During a prior committee meeting, NCSBA requested that the section be removed from the bill and referred to it as an unfunded mandate. Even though the section was removed, DPI and other advocacy groups are determined to have the section put back into the bill, meaning that the issue is far from over. HB 159 still has a few more committees to go through, as well as a Senate floor vote and a concurrence vote in the House.

HB 159 also does the following:

SB 693: Expedite Child Safety and Permanency (primary sponsors: Senators Steve Jarvis, R-Davidson; Joyce Krawiec, R-Forsyth; Chuck Edwards, R-Henderson) was modified and approved by the House Judiciary 1 Committee and referred to the House Health Committee. Section 6 was added to the bill and requires public schools to provide students in grades 6-12 with information and resources on child abuse and neglect, including sexual abuse. The information and resources must be distributed to students in a document at the beginning of each school year, displayed on a poster, and include warning signs of abuse and how to report it. The bill does not appropriate funds for this mandate. This new section of SB 693 incorporates language from HB 205, which passed the House 119-0. Click here for an official bill summary.

Click here for a chart of all education-related bills that NCBSA is tracking.

This week the ABC Science Collaborative released two reports regarding the transmission of COVID-19 in NC’s public schools. One report focuses solely on NC data and the other report includes data from multiple states. Findings and data analysis include:

SB 220: The Reopen Our Schools Act of 2021/SL 2021-4 requires local school boards to partner with the Collaborative for the collection and analysis of this data. The release of these reports came on the same day that the Senate voted to not concur with a bill modified by the House that would allow local school boards to determine the use of face masks for the upcoming school year (SB 173).

Eligible schools can apply for financial support between June 29 and August 13 to purchase much needed devices like laptops, tablets, Wi-Fi hotspots, modems, routers, and broadband connectivity. This is part of the Federal Communications Commission’s (FCC) $7.17 billion Emergency Connectivity Fund that aims to serve unmet needs for off-campus use by students and school staff during the COVID-19 pandemic.

The Governor’s Commission on Access to Sound Basic Education met on Tuesday for the first time since January 2020. The Commission was created in July 2017 and consists of 19 members appointed by the Governor to develop recommendations on how the State can meet its constitutional obligation of providing every student access to a sound basic education. As a reminder of the work done on the Leandro case in recent years, see the timeline below. 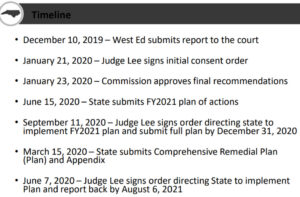 The meeting consisted of:

Implementation of the Plan relies on action by the General Assembly, which was a point of discussion during the meeting. Commission members expressed interest in having a tracking system or dashboard that shows the progression of how the Plan’s recommendations are being implemented, which DPI staff confirmed is a current project of the SBE. Geoff Coltrane, Governor Cooper’s Senior Education Advisor, explained where the State is in addressing the Plan’s recommendations, including Teaching Fellows expansion, advanced teaching roles expansion, new principal preparation programs, school administrator preparation standards, assistance for low-performing schools and districts, and HB 946, which would fully implement the Plan’s legislative actions for the next two years. During the presentation on the Leandro impact analysis tool, this chart was shared to compare the Plan’s cost tables with appropriations in the Senate budget. While Republican leadership in the General Assembly has insisted that because of the constitutional separation of powers clause, the court cannot compel the legislature on how to spend State money, Senate education leaders say that several of their budget provisions address Leandro.

The legislature will not be meeting in committee or session next week.

The State Board of Education has its monthly meeting on Thursday, July 8. (live stream)