This Week at the Legislature

The public business of the General Assembly this week was focused on Redistricting hearings that were held in six cities across the state. The Senate did not meet for a voting session this week and the House held only one voting session. Next week the House will have one voting session on Thursday morning and will take up HB 264, Emergency Powers Accountability Act  (The bill transfers emergency powers from the Governor to the Council of State). The Senate has not announced their plans for next week.

Behind the scenes, the budget conference committee continues to work. Speaker Moore gave a peek into the budget negotiations in an impromptu news conference outside his office on Wednesday. Speaker Moore said that budget conferees had agreed on taxes and a lot of the capital projects. He said there were still differences to resolve on salaries and benefits, federal ARP (American Rescue Plan Act of 2021) funds, policy issues, and State Capital and Infrastructure Fund (SCIF) funds. He believes a draft Conference Report on SB 105 (budget bill) can be sent to the Governor next week for his review. This draft will not be made public. The budget conferees will then negotiate with the Governor and his staff on the changes in the bill. Speaker Moore thinks the budget bill can be finalized in the first or second week in October.

In other news, Rep. Verla Insko (D-Orange) announced this week that she will not seek reelection in 2022. Rep. Insko is serving her 13th two year term in the House. She previously served on the Chapel Hill-Carrboro City Schools Board of Education from 1977 to 1985. We thank her for her service and support of public education.

Education-Related Bills with Action This Week

HB 324: Ensuring Dignity & Nondiscrimination/Schools was vetoed by Governor Cooper on September 13. The Governor’s veto message stated that “The legislature should be focused on supporting teachers, helping students recover lost learning, and investing in our public schools. Instead, this bill pushes calculated, conspiracy-laden politics into public education.” Click here to access the September 3 Legislative Update with NCSBA’s summary of the bill. Click here for an official bill summary. The bill was referred to the Committee On Rules, Calendar, and Operations of the House.

SB 593: Special Education Due Process Hearings (primary sponsors: Senators Brent Jackson, R-Sampson; Deanna Ballard, R-Watauga; Michael Lee, R-New Hanover) was scheduled to be heard in the House Judiciary 2 Committee on Wednesday, September 15, but the meeting was canceled. The meeting has not yet been rescheduled. NCSBA has stressed to legislators that SB 593 will not bring about any significant reduction in time nor costs in these special education cases.  NCSBA continues to work to improve this bill.

When SB 654 was signed into law (S.L. 2021-130) by Governor Cooper on August 30, many school boards may not have known about Section 10. Not only does Section 10 require all public school units to adopt a policy on the use of face coverings by employees and students for the 2021-2022 school year, but it requires the “governing body of the public school unit shall vote at least once a month on whether the face covering policy should be modified”. This bill has set off a monthly round of public hearings across the state that have become unruly in some cases.

When asked on Wednesday if the monthly meeting requirement was a good idea given recent protests, Speaker Moore responded “I believe it is a good idea to make sure that that process is done on a monthly basis. It allows parents, teachers, everyone else to really have transparency to see what’s happening and of course we left it up to those school boards to take whatever action they deem appropriate.”

NCSBA continues to track local school boards’ policies/resolutions on school mask requirements. Click here to access a chart of school board actions. If your school district changes its mask policy or you have corrections to the chart, please email information to Richard Bostic at rbostic@ncsba.org. 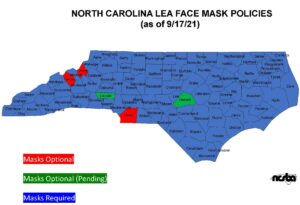 On September 15, Dr. Mandy Cohen, Secretary of the N.C. Department of Health and Human Services, asked the Union County Board of Education to rescind their motion on contact tracing and quarantine. Secretary Cohen urged the Union County Public Schools “to adopt all of the recommendations in the Toolkit and, at the very least, to reimpose the requirements to cooperate with local public health officials in identifying individuals exposed to COVID-19 as well as exclude students subject to isolation and quarantine measures described in the Toolkit no later 5:00 pm Friday, September 17, 2021. If Union County Board of Education does not take such steps by September 17th, legal action may be required to protect the public’s health.” (Click here for letter)

On September 13, the U.S. Department of Education approved our State’s Elementary and Secondary School Emergency Relief III (ESSER III) plan. As a reminder, NC has received two-thirds of its $3.6 billion in ESSER III funds, with the last third being subject to federal approval of a state application. North Carolina is now one of 17 states that have received federal approval of their plans. (Click here for the press release.)

Districts and schools receive 90 percent of the state’s total $3.6 billion ESSER III allocation, based on the same proportions used for allocating federal Title I funds keyed to census poverty estimates. The remaining 10 percent of the funds will support statewide initiatives to help schools and students recover from pandemic-related disruptions and to also improve long term student outcomes.

No education-related meetings were posted by Friday at noon.