Every year, NCSBA’s Governmental Relations Team provides a post-session summary of all education-related bills that have become law. Since it remains unclear when the General Assembly will adjourn, we felt now is as good a time as any to share with you summaries of bills that have become law so far this session. The GR Team will continue to update the document as additional bills become law. We will also include all education-related budget provisions, assuming that the governor and the legislature will come to an agreement on a new State budget (we remain hopeful).

Additionally, click here for a chart that lists the status of education-related bills.

According to a news source, Republican legislative leaders sent a budget counteroffer to Governor Roy Cooper on Tuesday. This comes two weeks after Governor Cooper provided his initial counteroffer to the House and Senate’s budget compromise proposal.

According to another news source, lead budget writer, Representative Jason Saine, told reporters that the legislature’s budget counteroffer includes teacher raises closer to the House’s proposal, which is 5.5% over two years (rather than the Senate’s proposal of 3%). That is about half of the 10% teacher raise included in the Governor’s proposed budget released earlier this year. Saine believes that budget negotiations could take another week or two, and House Speaker Tim Moore explained, “We’re either getting to the point of having a compromise with the governor or simply proceeding with a legislative budget.”

SB 496: DOI Omnibus Bill.-AB (primary sponsors: Senators Todd Johnson, R-Union; Chuck Edwards, R-Henderson; Tom McInnis, R-Richmond) was modified and approved by the House Insurance Committee and referred to the House Rules Committee. Section 6 of this bill requires LEAs to provide the Commissioner of Insurance with a list of all its insurable buildings, equipment and contents of the building, and their insurance values by October 1 each year. Section 6 also requires LEAs to provide the Commissioner with copies of insurance policies when purchasing insurance from an authorized company. Click here for an official bill summary.

During a Leandro hearing on Monday, Superior Court Judge David Lee explained that he is not willing to wait for Republican legislative leaders and the governor to reach a budget compromise that may include funding for the Leandro Plan. Instead, he is giving the plaintiffs in the Leandro case until November 1 to submit a proposed court order that would require the General Assembly to fund the Plan. Then he will give the defendants (the State) until November 8 to respond to the proposal, after which Judge Lee may enter an order or convene another court hearing.

This week’s court hearing follows a hearing held on September 8, during which Judge Lee gave the General Assembly and the governor an October 18 deadline to fund the Plan, or he would explore his judicial powers to enforce the Plan’s implementation. The Plan reportedly costs $690.7 million to fund in 2021-2022 and $1.06 billion in 2022-2023. These funds would support the seven key areas outlined in a January 2020 consent order, including a high-quality teacher in each classroom, a high-quality principal in each school, and early education that ensures all students enter kindergarten on track for school success. Click here for an article on this week’s hearing.

Also on Monday, Senate leader Phil Berger’s office issued a press release pointing to data from the National Education Association showing that NC’s increase in per-pupil expenditures over the past decade mirrors the national 33% increase. This was followed by another press release that included quotes from Judge Lee during Monday’s hearing when he asked about a Kansas judge that ordered the closing of schools statewide. In the press release, Senator Berger explained that this is “another example of why the founders were right to divide power among the branches of government” and that “Judge Lee makes a mockery of our constitutional order with every additional hearing.” The press release also reiterated that the legislature is not a party in the Leandro case.

NCSBA continues to track local school boards’ policies on school mask requirements as districts vote monthly on whether to modify their current policy (required by Section 10 of SB 654/SL 2021-130). Click here to access a chart of school board actions. If your school district changes its mask policy or you have corrections to the chart, please email information to Richard Bostic at rbostic@ncsba.org. 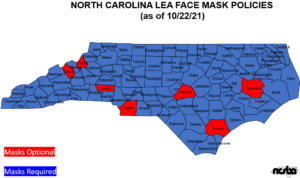