On Monday night, the State Supreme Court issued an order granting the request of plaintiffs and defendants to review Superior Court Judge David Lee’s November 10 order calling for the transfer of over $1.7 billion from the unappropriated balance in the General Fund to fund the Leandro Comprehensive Remedial Plan. Judge Lee’s order was denied by the State Court of Appeals on November 30, saying that Judge Lee does not have the authority to appropriate State funds. Both parties appealed that decision to the State Supreme Court.

Also on Monday night, State Supreme Court Chief Justice, Republican Paul Newby, issued an order reassigning the Leandro case from Judge Lee, who is a registered Democrat, to Superior Court Judge Michael Robinson, who is a registered Republican. The order does not cite a reason for Judge Lee’s removal but click here for an article that provides an explanation and analyzes the issue.

The State Supreme Court’s order says that prior to the Leandro case coming before the Court, the Superior Court judge, who is now Michael Robinson, has no more than 30 days to determine what effect, if any, the new State budget has on the November 10 order. Judge Robinson now has the authority to amend Judge Lee’s November 10 order prior to it being submitted to the State Supreme Court for review.

On Thursday, Judge Robinson announced a timeline for action on the Leandro case leading up to the April 20 deadline for submitting an order to the State Supreme Court. By April 4, the defendant (the State) must provide a report on how much of the Comprehensive Remedial Plan is funded by the State budget. Then all other parties will have a chance to respond, and Judge Robinson will hold a hearing on April 13 to decide whether to amend Judge Lee’s order before submitting it to the State Supreme Court. Click here and here for articles on the timeline that include statements from attorneys representing parties in the case.

Click here and here for articles on the two orders issued on Monday night, which also include background on the Leandro case.

Prior to the State Supreme Court’s order, the attorney representing House Speaker Tim Moore and Senate leader Phil Berger submitted a filing on February 28 asking the State Supreme Court to not take up the Leandro case. Both legislative leaders had previously said that they are not parties in the case but in December 2021 they filed a notice of intervention and argued that Judge Lee exceeded his authority in ordering the transfer of over $1.7 billion.

The number of districts that have adopted optional mask policies has increased by two since last Friday, March 18.

NCSBA continues to track local school boards’ mask policies as districts vote monthly on whether to modify their current policy (required by Section 10 of SB 654/SL 2021-130). Click here to access a chart of school board actions. If your school district changes its mask policy or you have corrections to the chart, please email information to Rebekah Howard at rhoward@ncsba.org. 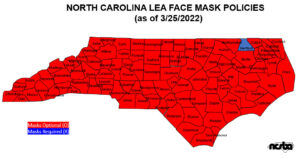 Please note that we may not be sending legislative updates on a weekly basis while the General Assembly is not in session.