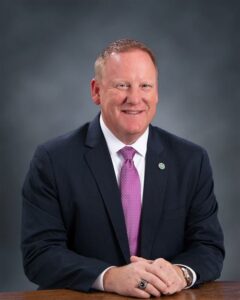 Dr. Phipps joined Caldwell County Schools as superintendent in 2018 and since that time has been a driving force in creating positive change in his district, particularly in the areas of budget management, student wellness, and community involvement.

“It’s overwhelming and a real honor for me to represent the superintendents in North Carolina with the work that they do and to call them all my peers,” said Phipps. “Gratitude is not a strong enough word. I look forward to serving them and representing them.”

Jack Hoke, Executive Director of the North Carolina School Superintendents’ Association, praised Phipps for the leadership that has earned him the top honor for local superintendents in NC. “Dr. Don Phipps is a leader among leaders,” Hoke said.

The 2023 North Carolina Regional Superintendents of the Year, all of whom were nominees for this prestigious state award, were also recognized as such at the ceremony: