The State Board of Education (SBE) met this week on January 4 and 5 for its monthly meeting. Board members were presented with the following:

New State Health Plan administrator: State Treasurer Dale Folwell, who is a member of the SBE, notified the Board that Aetna won the contract to administer NC’s health coverage plan for State employees, starting in January 2025. The State Health Plan covers nearly 740,000 people, including teachers. Aetna will replace Blue Cross and Blue Shield of NC, which has been the administrator for over 40 years. Blue Cross reportedly said it was “deeply disappointed” by this decision and that the company will pursue a formal appeal.

Treasurer Folwell said the Aetna contract could create $140 million in cost savings over five years. He added, “A change of this magnitude is a great opportunity for a fresh perspective, and we look forward to working closely with Aetna to create new ways to provide price transparency, increase access and quality while lowering the cost of health care for those who teach, protect and serve, and taxpayers like them.”

Additionally, the Board approved a motion requesting support from the General Assembly and Governor for full implementation of the Leandro Comprehensive Remedial Plan (see next section for most recent Leandro updates), approval of the Board’s 2023 budget requests, and approval of pilot implementation of the new teacher licensure/salary model once dollar amounts are provided (see below for most recent update). Click here for the presentation that includes all budget requests.

Teacher licensure/salary model blueprint for action update: The Board was presented with statutory, rule, and policy changes that would need to be made to establish a pilot program of the teacher licensure/salary model blueprint. The presentation given by SBE General Counsel Allison Schafer includes general recommended changes that will be more narrowly tailored when DPI’s Professional Educator Preparation and Standards Commission (PEPSC) establishes specifics of the model. PESPC is scheduled to present recommendations for the pilot at the Board’s March meeting. Board Chair Eric Davis reminded the Board that the current plan is to potentially begin pilot implementation in fall 2023, which would require legislative approval. Click here for the presentation, which includes legislative changes needed for pilot implementation on slides 21-31

As a reminder, PEPSC is developing this model, which would pay teachers based on performance, effectiveness, and years of experience, rather than exclusively on years of experience. The model is expected to provide higher salaries for most, if not all, teachers.

2021 Youth Risk Behavior Survey (YRBS) data: The Board was presented with 2021 YRBS data. DPI deploys the survey in every odd numbered year to help assess youth behaviors that impact their health now and in the future. This was the first YRBS since the beginning of the COVID pandemic. This data was presented in December at a meeting of the Child Fatality Task Force, and we included data points in our December 16, 2022, Legislative Update. In case you missed it, here are some data points for high school students.

Click here for the presentation that includes more YRBS data (slides 15-35), as well as data from the 2021 Healthy Active Children Policy Report (slides 3-11).

Following Board member discussion, DPI staff said they will work on comparing social media use with mental health issues that have increased among students. Chair Davis noted the need for more mental health support personnel in schools and referenced the Board’s legislative budget priorities that aim to fill those positions (see above). Additionally, on Wednesday, DPI announced the State was awarded approximately $17 million in federal grant funding to increase mental health support in public schools. Click here to access DPI’s press release.

Impact of COVID on absences, grades, and grade retention: The Board was presented with results of a State-funded study assessing the impact of COVID on student attendance and grades. The report found, “In 2020-21, students had more absences and lower course grades, were more likely to be chronically absent, to fail at least one course, and to be retained in grade.” Those most impacted by chronic absenteeism include students in the lowest quartile of prior achievement (42.4%), economically disadvantaged students (35.6%), black students (33.3%), and English learners (32.9%). In the 2020-21 school year, 39.6% of middle school students failed at least one course, compared to 15.5% pre-pandemic, and 34.9% of high school students failed at least one course, compared to 21.7% pre-pandemic. Regarding students who enrolled in summer 2021 programs, the study found that enrollees were less likely to repeat failed courses. Click here to access the presentation, which includes more disaggregated data. 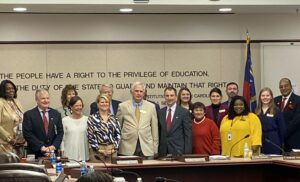 The decades-old Leandro case has a new presiding judge. On December 29, 2022, State Supreme Court Chief Justice Paul Newby reassigned the case to Superior Court Judge James Ammons of Cumberland County. This follows Superior Court Judge Michael Robinson’s November 30, 2022, letter to Chief Justice Newby requesting the case be reassigned to another judge because of Robinson’s workload and demands on his docket as a Business Court Judge.

The following is a recent timeline leading up to the reassignment of the Leandro case to Judge Ammons.

Click here for an article with more information on these Leandro updates.

JROTC programs across North Carolina (and the country) won an important victory just before the New Year as Congress passed and President Biden signed legislation to ease the requirements on the type of military personnel that can be hired as instructors for the program. Previously, those instructors were limited to retired military. Under the new law, active reservists and the honorably discharged with at least eight years of service may now be employed as instructors. This makes it much easier for schools with JROTC programs to staff the instructor positions.

The legislation passed as part of the National Defense Authorization Act. NCSBA alerted districts across the State to contact their members of Congress and urge support of the bill. One of the early leaders in the fight was William “Bill” Sharpe, Nash County Board of Education Chair. Sharpe worked with Senator Thom Tillis’ office to monitor the legislation as it progressed through both chambers of Congress.

“This is a great victory for districts across North Carolina,” said Sharpe. “JROTC programs have benefitted so many students by not only teaching them leadership but providing them with real career opportunities. The challenge has been to keep the instructor positions staffed and with this important legislation passing, that task is much easier. I’m thankful to all the other districts who contacted their member of Congress and told them how important this was.”

The following is the Consortium of State School Boards Association’s (COSSBA) most recent federal education report.

Headlines for this edition include:

The 2023 legislative long session kicks off with a ceremonial day on Wednesday, January 11. Legislators will then have a two-week break, and return to Raleigh on Wednesday, January 25 to begin their work. Unlike the circus we’ve been seeing in the US House these past few days, we expect House Speaker Tim Moore, R-Cleveland, and Senate leader Phil Berger, R-Rockingham, to easily be reelected into their leadership positions next Wednesday.